CORONADO, Calif., Aug. 1, 2005 (PRIMEZONE) -- In front of more than 5,000 guests, U.S. Sen. John McCain (R-Ariz) hailed Northrop Grumman Corporation (NYSE:NOC) and its Gulf Coast shipbuilders who built USS Halsey (DDG 97) saying, "you should take great pride in your contribution to our Navy and to our nation."

USS Halsey (DDG 97) honors Fleet Adm. William Frederick "Bull" Halsey Jr., a World War I and World War II Naval hero who was present when Japan formally surrendered on the deck of his ship, USS Missouri (BB 63), on Sept. 2, 1945. After earning the Navy Cross for his service in WW I, his carrier task force took part in the Doolittle raid on Tokyo in WW II. Halsey took command of the Third Fleet in May 1945 and through the end of the Pacific War. Promoted to the rank of fleet admiral in December 1945, Halsey retired from active duty in March 1947, and died in August 1959.

"The name given to a warship has meaning far beyond what most of us can understand," McCain said. "A warship creates and leaves a legacy far into the future. In almost 230 years, the Navy has given us many heroes deserving of this honor, but no name is more deserving of this honor than Adm. Halsey. I am confident that the crew of this destroyer are worthy of this great namesake."

"With this commissioning ceremony, William F. Halsey once again officially returns to the Pacific Ocean," McCain continued. "And I leave you today with the famous command of a fighting admiral, 'hit hard, hit fast, hit often.'"

Three of Halsey's granddaughters are co-sponsors for the ship -- Anne Halsey Smith, Heidi Cooke-Halsey and Alice "Missy" Spruance Talbot. Talbot's daughter, Margaret, represented her mother at the ceremony and, together with her aunts, made a call to "man this ship and bring her to life." In response, the crew of 365 officers and enlisted personnel took to the decks of Halsey and manned the rails.

Navy Rear Adm. Charles S. Hamilton, II, program executive officer for ships, noted the process improvement strides made by the shipbuilding team during the construction of Halsey saying, "It is the collective faith, determination and heart of this team that has turned concept into reality and brought this mighty ship to life. You build great ships for a grateful nation and I could not be prouder of your efforts."

"Halsey has already begun her career leading from the front, exceeding all cost, schedule and performance parameters," continued Hamilton. "She went to sea two months early, delivering three months ahead of schedule and well under budget. Her Aegis and generator lightoffs were the best ever recorded in the history of the Aegis program."

Aegis destroyers are equipped to conduct a variety of missions, from peacetime presence and crisis management to sea control and power projection, in support of national military strategy.

"The practice of building a great naval vessel for our nation's security can be readily summed up with the words pride, dedication, quality, integrity, commitment and hard work," said Philip A. Teel, president, Northrop Grumman Ship Systems. "These words, individually, conjure up wonderful imagery and stirring emotion. But when put together and applied as human skill, they yield a whole greater than the sum of its individual parts. That is the business we love to be in -- building great ships; building freedom."

"As stability returns to our Nation's shipbuilding plans we can more confidently go about building the Navy's next Fleet," continued Teel. "And I mean 'we.' Northrop Grumman is working every day with our customers and the Congress to ensure that our seven decade long history of building great ships on the Gulf Coast continues. We're ready to build the next fleet and in fact we are building it right now." 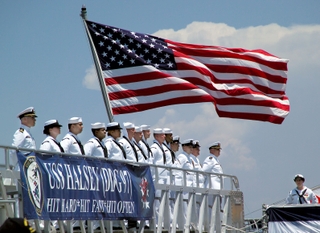