NEW ORLEANS, March 10, 2007 (PRIME NEWSWIRE) -- Speaking to a crowd of more than 5,000, U.S. Sen. David Vitter of La., described the Northrop Grumman-built (NYSE:NOC) amphibious transport dock ship New Orleans (LPD 18) as a ship that "embodies a new culture of technological growth and economic progress not only for the Navy and Marines, but also for the city of New Orleans and Louisiana. This ship represents new processes, design work and engineering that will clearly serve the Navy, Marines and our country very well."

The ship was commissioned into the U.S. Navy's Pacific Fleet here today on the banks of the Mississippi River.

"I want to honor today the talented, dedicated and proud citizens of Louisiana who have produced this magnificent ship behind me," said Sen. Vitter. "Thousands of Louisianans who serve their country, maybe not on the front lines, but they serve us admirably nonetheless."

New Orleans is one of the most technologically advanced and sailor-friendly ships ever built. The ship's sponsor, Carolyn Johnson Shelton, wife of former Chairman of the Joint Chiefs of Staff U.S. Army Gen. Henry Hugh Shelton (ret.), ordered the 360 officers, enlisted crew and Marines to "man our ship and bring her to life" at the culmination of Saturday's ceremony, which included a U.S. Marine Corps 19-gun salute.

Secretary of the Navy Donald C. Winter placed LPD 18 in commission. "New Orleans has long been associated with trying times, great challenges and an irrepressible spirit," Winter said. "That spirit was fully in evidence in the way that Northrop Grumman's New Orleans shipyard workers restored production after the devastation of Hurricane Katrina. They completed the mission and the ship standing here today is a tribute to their dedication and spirit."

The New Orleans is the second Northrop Grumman-built ship in the USS San Antonio (LPD 17) class. This new class of ship affords the U.S. Navy's Expeditionary Strike Group (ESG) with the technology and flexibility to launch and recover two amphibious Landing Craft, Air Cushion (LCAC) and operate an array of rotary-wing aircraft; as well as the ability to carry and launch 14 Marine Corps Expeditionary Fighting Vehicles (EFV).

New Orleans Mayor C. Ray Nagin welcomed all commissioning guests and noted, "This is truly an historic day in the city of New Orleans. This ship and the city of New Orleans have a lot in common. We both survived Hurricane Katrina and we have both been rebuilding together after the storm. Those experiences have endowed us both with dignity and today we both stand as examples of America's perseverance."

The commissioning ceremony marks the first time since World War II that a Navy ship has been built and commissioned in the city for which it is named.

"My fellow shipbuilders understand the importance of their duty and they have left their pride and affection on every bolt, every weld and every inch of cable," said George Yount, Northrop vice president of ship construction. We will be there in every unit of horsepower produced by the engines, in every byte of information generated by its advanced computers and sensors."

Navy Cmdr. John B. Skillman of Muncie, Ind., is the ship's first commanding officer and will lead a crew of 360 officers and enlisted Navy personnel.

"In my entire Navy career, I have never been so fortunate to work with such dedicated people like the shipbuilders at Northrop Grumman and this crew," said Cmdr. Skillman.

The ship is 684 feet long and 105 feet wide and is capable of embarking a landing force of up to 800 Marines. The LPD 17 class has a navigational draft of 23 feet and displaces approximately 25,000 tons. Four turbo-charged diesels power the ship to sustained speeds of 24 knots. New Orleans will be homeported in San Diego. 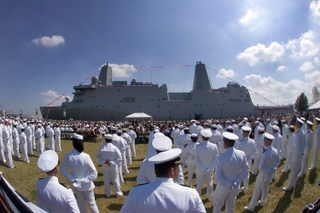