NNS is building CVN 78, a nuclear-powered aircraft carrier for the U.S. Navy named in honor of the 40th President. The centennial events were held at the Gerald R. Ford Museum in Ford's hometown of Grand Rapids, Mich.

"We are proud to be building CVN 78—named for a man who embodied integrity, honor and courage," NNS President Matt Mulherin said during a wreath-laying ceremony on Sunday. "We are building his ship with the same pride, quality and dedication that we have built ships with for more than a century. We take great pride in this responsibility and feel a tremendous sense of ownership in the role we play to build upon President Ford's legacy."

Shipbuilders participated in the ceremony, during which four wreaths were laid—one on behalf of President Barack Obama, one on behalf of the Ford family, one from NNS shipbuilders and one from the CVN 78 crew. Following the ceremony, a CVN 78 model was unveiled inside the atrium of the Ford Museum. Mulherin also presented an illustration of President Ford that is framed in steel taken from his namesake ship. The illustration will be displayed alongside the model in the museum.

The aircraft carrier Gerald R. Ford will be christened Nov. 9. Susan Ford Bales, the ship's sponsor and President Ford's daughter, will perform the traditional honor of breaking a bottle of American sparkling wine across the ship's bow during the ceremony.

"To all of my fellow shipbuilders, I am thinking about you—for your kindness, your support and your friendship over the last several years," Ford Bales said Sunday. "I have welded with you on the carrier. I have punched holes. I have turned wrenches and gone up in the shipyard's crane. So to be called a shipbuilder makes me prouder than you'll ever know." 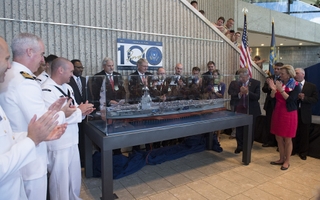