Photos accompanying this release are available at http://media.globenewswire.com/noc/mediagallery.html?pkgid=8077

Mrs. Willard is the wife of Adm. Robert F. Willard, the Commander of the U.S. Pacific Command. "This was a very exciting day for me," said Willard.  "To be able to spend time with the crew of California and see a completed submarine ready to be put in the water was very special. The enthusiasm of the crew should make all of us as Americans very proud.  I am very honored to be the sponsor of California and look forward to the christening."

"California is 86 percent complete and approaching the construction milestone of launch this fall," said Bob Bolden, construction director at Northrop Grumman Shipbuilding-Newport News. "Launching the ship signifies the boat is ready to go in the water and begin a series of waterborne tests. During this time, the ship's systems and compartments are transitioning over to Ship's Force in support of sea trials next year."

"We're excited Mrs. Willard could return to the shipyard so quickly. She's an enthusiastic and excited sponsor," added Bolden. "Our shipbuilders are proud to show off their high-quality craftsmanship and the beginning preparations for the ship's upcoming christening on Nov. 6."

California, the eighth ship of the Virginia class, is named after the "Golden State." It is being constructed at the company's Shipbuilding sector in Newport News, Va. The ship's keel was laid in May 2009. Once delivered to the Navy in 2011, California will be the most modern and sophisticated attack submarine in the world, providing undersea supremacy well into the 21st century. Northrop Grumman Shipbuilding is teamed with General Dynamics Electric Boat to build Virginia class submarines. 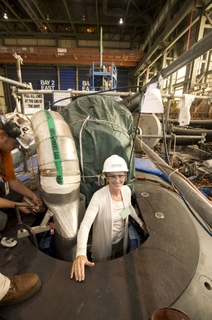