"The ship performed well and the trial results demonstrate the progress we are making with this ship class," said Philip Teel, corporate vice president and president of Northrop Grumman's Ship Systems sector. "Make no mistake, LPD 19 will provide our sailors and Marines with a reliable and capable platform to perform their mission of defending freedom."

"The completion of acceptance trials is a major step towards bringing LPD 19 into the fleet, and we look forward to ship delivery later this month," said Rear Adm. Chuck Goddard, the Navy's program executive officer for ships. "Mesa Verde performed very well on trials, and its condition and performance is a testament to the craftsmanship of the shipbuilders. I expect this trend to continue as the company completes the rest of this incredibly capable class."

Mesa Verde's mission is to embark, transport and land elements of a landing force in a variety of expeditionary and special operations missions. She will be commissioned in Panama City, Fla. on Dec. 15, 2007.

"I am well pleased with Mesa Verde's performance on acceptance trials," said U.S. Navy Cmdr. Shawn Lobree, LPD 19's prospective commanding officer. "This highly capable ship passed all major testing events and is ready to be delivered to the Navy. As I have often said, it takes teamwork to build such a sound ship, and this is a testament to years of hard work by the Northrop Grumman/Navy team."

Mesa Verde is an LPD 17-class ship. The ship is 208.4 meters (684 feet) long, 31.9 meters (105 feet) wide, and will replace the functions of the LPD 4, LSD 36, LKA 113, and LST 1179 classes of amphibious ships. This new ship class affords the Navy's Expeditionary Strike Group with the technology and flexibility to launch and recover amphibious landing craft such as the Landing Craft Air Cushion (LCAC), operate an array of rotary-wing aircraft, and carry and launch the U.S. Marine Corps' Expeditionary Fighting Vehicle. 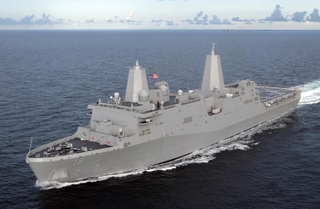