"This Navy tradition is even more special today because it's happening three days before what would have been President Ford's 100th birthday," said Rolf Bartschi, NNS' vice president, CVN 78 carrier construction. "Among the items are those that commemorate President Ford's lifetime achievements. We are proud to honor him, and we feel privileged to provide the ship's force with such an important piece of our nation's history."

During the island-landing event in January, Ford Bales placed a sandstone piece made of the same stone used in the construction of the White House and the U.S. Capitol. The piece was embedded with a unique coin she designed, as well as five official seals representing her father's service to the nation. The sandstone and other items placed under the island by shipyard and Navy leadership were sealed inside a steel time capsule along with a description of the items and the Navy tradition.

Gerald R. Ford's primary hull structure reached 100 percent structural completion in May, bringing more than three years of structural erection work to a close. Work continues on the ship, including the piping and electrical systems and the habitability areas such as the galley and mess spaces. Shipbuilders are also in the process of painting the hull prior to the ship's christening, scheduled for Nov. 9.

Capt. John F. Meier assumed command of the ship on July 8. "Gerald R. Ford was first and foremost a man of integrity, and he was also a man of humility," he said at the event. "What a great ideal for today's sailor and today's shipbuilder and truly for all of us as a nation." 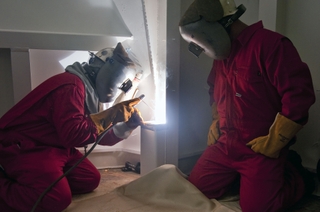