Photos accompanying this release are available at http://www.northropgrumman.com/mediagallery

"Delivering one ship is a tremendous accomplishment, as a ship delivery flexes nearly every muscle in a shipbuilding organization," said Mike Petters, corporate vice president and president of Northrop Grumman Shipbuilding sector. "But to deliver two highly technical and complex ships within a few days of each other is a true testament to the skill, commitment, and sense of ownership found in the talented men and women who built these ships for the U.S. Navy. It exemplifies the breadth of capability and would not happen without a close partnership with our customer."

The newest Aegis guided missile destroyer, Dewey (DDG 105), was delivered to the U.S. Navy during a ceremony held Monday, Aug. 17 in Pascagoula attended by shipbuilders and the ship's crew, as they stood in formation on the ship's aft deck during the delivery ceremonies.

The 510-foot, 9,500-ton Dewey has an overall beam of 59 feet and a navigational draft of 31 feet. Four gas-turbine propulsion plants will power the ship to speeds above 30 knots. The highly capable, multi-mission ship can conduct a variety of operations, from peacetime presence and crisis management to sea control and power projection, all in support of the United States' military strategy.

Cmdr. Warren Buller is the ship's first commanding officer and will lead a crew of more than 300 officers and sailors. During the ceremony, he reminded those present of the ship's namesake, Adm. George Dewey, and his actions at the Battle of Manila Bay during the Spanish-American War 111 years ago. "The responsibility remains for us to emulate those very same actions in defense of our own country, freedom and democracy around the world," he said. "With DDG 105, we're convinced we're getting a fine ship that will extend the legacy of those who have gone before us in defense of freedom and democracy."

Northrop Grumman Shipbuilding also delivered one of the nation's newest and most anticipated advanced warships, the amphibious transport dock ship New York (LPD 21), on Friday, Aug. 21 during an emotional ceremony held aboard the ship at its Avondale facility in Louisiana.

The ship contains 7.5 tons of World Trade Center steel in its bow stem, the forward-most part of the ship that slices through the water. It is the fifth in a series of USS San Antonio (LPD 17)-class ships built by Northrop Grumman.

"This has been a long day coming, and we wouldn't be here today if not for the efforts of a lot of people," said Cmdr. Curt Jones, U.S. Navy, LPD 21 prospective commanding officer, during the delivery ceremony held aboard the ship on Friday, Aug. 21. "To the shipbuilders, you have delivered to us the best LPD ship ever, but I would suggest to you that it is the best ship ever delivered."

New York (LPD 21) is 684 feet long, has a beam of 105 feet and has a displacement of approximately 25,000 tons. Its four medium-speed diesel engines drive it to speeds in excess of 20 knots. These versatile, multi-mission ships will replace the functions of more than 40 ships in four different Navy classes. 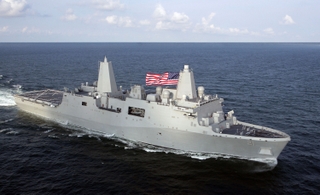