James E. Williams honors Petty Officer 1st Class James Eliott Williams, of Darlington, S.C., one of the most highly decorated enlisted sailors in the history of the Navy. Williams received the Congressional Medal of Honor for bravery and leadership in 1966 while serving as patrol commander of River Patrol Boat 105 on the Mekong River during the Vietnam War.

On Oct. 31, 1966, Williams was captain of 105 when that boat and another, assisted by helicopter gunships, engaged scores of enemy boats on the Mekong. After three hours of heavy fighting, Williams' patrol had accounted for the destruction or loss of 65 enemy boats and more than 1,000 enemy troops.

Sen. Lindsey Graham (R- S.C.) delivered the principal commissioning address. "If you ask me, 'is America strong,' yes, we're strong," said Graham. "We're strong because we build the best ships, but the strength of this country is because we have the best people. Ladies and gentlemen, this ship is going to keep us free."

The ship's sponsor, Elaine Weaver Williams, James Williams' widow, made a call to "man this ship and bring her to life." In response, the crew of 365 officers and enlisted personnel took to the decks of James E. Williams and manned the rails before more than 1,500 guests.

Aegis destroyers are equipped to conduct a variety of missions, from peacetime presence and crisis management to sea control and power projection, in support of national military strategy. These multi-mission ships provide primary protection for the Navy's aircraft carriers and battle groups, as well as essential escort to Navy and U.S. Marine Corps amphibious forces, combat logistics ships and convoys.

Philip A. Dur, president, Northrop Grumman Ship Systems, also delivered remarks at the ceremony. "This ship is a fitting guarantor of our needs for constant access to the sea lanes and secure maritime domains which envelope our most vital interests," said Dur. "We're building the 21st century fleet today . . . we are building on the traditions of what we are fond of calling 'America's shipyard,' and we are leveraging the trust we have earned building new ships and repairing combat-damaged ships, like USS Cole, USS Stark and USS Princeton."

The 509.5-foot, 9,300-ton James E. Williams has an overall beam of 66.5 feet, and a navigational draft of 33 feet. Four gas turbine propulsion plants will power the ship to speeds above 30 knots. DDG 95 is the 45th ship in the Arleigh Burke class of Aegis guided missile destroyers and the 21st built by Northrop Grumman. 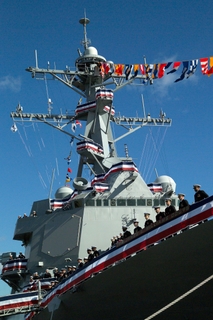