AVONDALE, La., May 14, 2011 (GLOBE NEWSWIRE) -- Nearly 1,200 guests attended the christening of Anchorage (LPD 23), the seventh ship in the USS San Antonio class of ships being built by Ingalls Shipbuilding, a division of Huntington Ingalls Industries. LPD 23 officially received its name when ship sponsor Annette Conway broke a bottle across the ship's bow at the culmination of the ceremony held at the company's Avondale Operations.

"Amphibious ships like the new and improved Anchorage—the seventh of the superb San Antonio class—are among the most useful ships in our fleet," said the Honorable Robert O. Work, Under Secretary of the Navy and the ceremony's principal speaker. "In my view, they are the most iconic symbol of the power of the Navy-Marine Corps team. A team forged in battle, tested over time and better for the unbreakable bond between the two services.

"To the officers and crew of Anchorage, we extend our deepest gratitude," Work continued. "We commit to you the best this nation can provide to ensure you may prevail in your future missions and return home safe."

Anchorage is the first ship to be christened under the Huntington Ingalls Industries name. America's largest military shipbuilder was previously a business sector of Northrop Grumman until effectively separating on March 31 in a spinoff of the company to shareholders.

"LPD 23's history is yet to be made," said Irwin F. Edenzon, president, Ingalls Shipbuilding. "However, I assure you that we have built her well, and we'll watch with pride as she sails away next year to join the fleet in service to our nation. There are many things that we're doing every day to build better ships, faster and more cost effectively and, most important, keeping our shipbuilders working safely. Our shipbuilders build the greatest ships in the world for the greatest Navy and Marine Corps the world has ever known."

George Vakalis, municipal manager of Anchorage, Alaska, also spoke, saying, "This is a significant event for us and for the Navy and Marine Corps because of the capabilities this ship provides them. We are very appreciative to have a ship named for our city, Anchorage. We love our military."

Ingalls Shipbuilding has delivered the first five ships of the LPD 17 class, LPDs 17-21. San Diego (LPD 22) will undergo sea trials this summer; Arlington (LPD 24) was christened on March 26, and Somerset (LPD 25) is more than 50 percent complete and will be launched in 2012.

Anchorage is currently 82 percent complete and is expected to be delivered in the second quarter of 2012.

"Today's shipbuilding decisions do not determine naval issues today, they lay the foundations for naval action one, two and three decades into the future," said Rear Adm. David Lewis, the Navy's program executive officer for ships. "Shipbuilding is an act of faith, an affirmation of hope, a promise to future Americans that we, of this generation, will meet our commitments to them—just as our predecessors have met their commitments to us, today, with this ship and her sisters in shipyards across our great land."

The 11 ships of the LPD 17 class are a key element of the Navy's ability to project power ashore. Collectively, the ships functionally replace more than 40 ships (LPD 4, LSD 36, LKA 113, and LST 1179 classes of amphibious ships), providing the Navy and Marine Corps with modern, sea-based platforms that are networked, survivable and built to operate with 21st century platforms, such as the MV-22 Osprey. 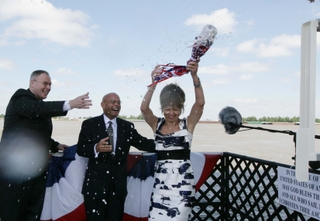