The ship honors Boatswain's Mate First Class James Elliott Williams (1930-1999), often referred to as the most decorated enlisted man in U.S. naval history. The late Williams' widow, Mrs. Elaine Weaver Williams of Darlington, S.C., is the ship's sponsor. Two of the Williams' daughters, Debbie Williams Clark of Palm Coast, Fla., and Gail Williams Patterson of Florence, S.C., were on hand as Matrons of Honor for the event.

The keynote speaker at the ceremony was Acting Secretary of the Navy, Hansford T. Johnson. Sec. Johnson is a retired four-star U.S. Air Force general from South Carolina who, like James E. Williams, served in Vietnam.

"It is fitting that this destroyer carry the name of Boatswain's Mate James E. Williams," said Sec. Johnson, "for the strength of his spirit is reflected in the strength of this ship. It will take determination and strength for this ship and her crew to live up to her heroic namesake. We often talk about the members of the armed forces, but really we should talk about a much larger organization, and that is all the people that support our armed forces. Certainly, Northrop Grumman Ship Systems plays a big role."

Williams is the recipient of numerous military awards, including the Congressional Medal of Honor, presented to him May 14, 1968, by President Lyndon Johnson. The award cited Williams' "conspicuous gallantry and intrepidity at the risk of his life above and beyond the call of duty," during his service in Vietnam, and in particular on Oct. 31, 1966. While serving as boat captain and patrol officer aboard River Patrol Boat 105 with another boat under his charge, Williams and his crews became involved in a firefight with Viet Cong guerrillas. After three hours of battle, despite waning ammunition, Williams and his crews prevailed, sinking 65 enemy boats and inflicting over 1,000 enemy casualties.

"In a 1998 interview with the Navy's All Hands magazine, 'Boats' Williams himself stated, 'You've got to think about your shipmates. That's what makes you a great person and a great leader -- taking care of the troops'," said Rear Adm. Charles Hamilton II, program executive officer, Ships. "Mrs. Williams, I did not have the honor of knowing your husband. I'm told he was a humble man, and as so many true heroes prove to be, he turned down countless opportunities for public recognition. I believe he would have been proud of this ship, her crew, and those who made this day possible."

James E. Williams (DDG 95) is the 45th ship in the Aegis destroyer program and the 21st built by Northrop Grumman Ship Systems.

"The Aegis destroyer program is the bedrock of contemporary naval strength, yielding powerful and capable ships with awesome technological advances throughout the 25-year history of the program," said Phil Dur, president, Northrop Grumman Ship Systems. "The Northrop Grumman team builds and tests these authoritative platforms. They pour everything they have in making each ship better than the last, because we believe in our hearts that only the finest vessels should bear the names of our nation's finest heroes."

The ceremony culminated with the traditional smashing of a bottle of champagne across the ship's bow by Mrs. Williams. Northrop Grumman Ship Systems will deliver James E. Williams to the Navy in 2004.

Northrop Grumman's Ship Systems Sector includes primary operations in Pascagoula and Gulfport, Miss.; and in New Orleans and Tallulah, La., as well as in a network of fleet support offices in the U.S. and Japan. Ship Systems, which currently employs more than 17,000 shipbuilding professionals, primarily in Mississippi and Louisiana, is one of the nation's leading full service systems companies for the design, engineering, construction, and life cycle support of major surface ships for the U.S. Navy, U.S. Coast Guard and international navies, and for commercial vessels of all types. 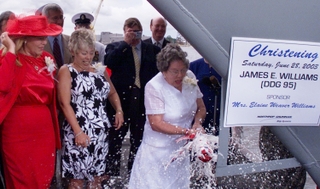