This is the first option exercised on the initial contract, awarded in July 2005. With this option, the total contract value has increased to $203.7 million. If all options are exercised, the contract has the potential to reach $264 million.

The LHA 6 will replace the LHA 1 class of amphibious assault ships, and will have the flexibility to operate in the traditional role as the flagship for an expeditionary strike group as well as potentially playing a key role in the Maritime Prepositioning Force Future. As the Navy's Seabasing plan matures in the next few years, the flexibility to operate with the expeditionary strike group and as part of the Maritime Prepositioning Force Future will make the LHA 6 a vital part of the Sea Base.

Northrop Grumman delivered five USS Tarawa-class (LHA 1) and seven USS Wasp-class (LHD 1) ships to the Navy, with an eighth, Makin Island (LHD 8), currently under construction. The LHA 6 Class will be a variant of the gas-turbine powered LHD 8 and will launch tilt-rotor helicopters and fixed-wing, short take-off vertical landing aircraft in support of amphibious operations. 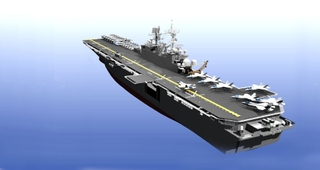