"Compared to the sophistication and the quality of the work that is being done here, the decisions that we have to make to get this budget in a better process and to avoid ugly and non-strategic cuts—it's not hard," Kaine said during a press conference following the tour.

HII President and CEO Mike Petters joined Kaine for the press conference held in front of the USS Theodore Roosevelt (CVN 71), an aircraft carrier undergoing its refueling and complex overhaul (RCOH). Petters mentioned that the current budget process has stalled the aircraft's overhaul and has delayed the arrival of USS Abraham Lincoln (CVN 72), which was scheduled to arrive Feb. 14 for its RCOH.

"We need to move forward legislatively with the FY13 budget in some fashion that allows us to start programs on time," Petters said. "All of this process that we find ourselves in the middle of has kept Lincoln from coming in on time. That's going to make the process of refueling that ship more expensive for taxpayers than we originally planned, and Senator Kaine understands that very well."

"Newport News Shipbuilding has already been negatively impacted by the recent delay in aircraft carrier Abraham Lincoln's refueling and complex overhaul," said Mulherin. "Senator Kaine saw first-hand today how hard we are working to build these warships as efficiently and cost-effectively as possible, and we're confident he is returning to Washington with a better understanding of how difficult it will be to meet those efficiency objectives should a decision be made that does not place top priority on our nation's defense."

Kaine was elected to the U.S. Senate this year and is a member of the Senate Armed Services Committee. He served as the 70th governor of Virginia from 2006 to 2010. 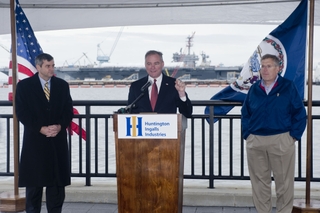