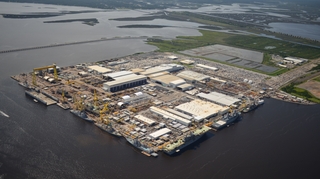 “In today’s competitive business environment, it is extremely important to foster a collaborative and cooperative partnership between management and labor to provide the best working environment for our shipbuilders,” said Ingalls Shipbuilding President Brian Cuccias. “This contract extension does that. It also rewards our employees for their role in Ingalls’ success and positions us competitively for future shipbuilding competitions.”