NEWPORT NEWS, Va., June 20, 2013 (GLOBE NEWSWIRE) -- Huntington Ingalls Industries' (NYSE:HII) Newport News Shipbuilding (NNS) division celebrated the return of USS Enterprise (CVN 65) today during the ship's final homecoming to the shipyard for her inactivation. Towed from Naval Station Norfolk to the shipyard, Enterprise had more than 100 shipbuilders on board who were involved with the construction and maintenance of this first nuclear-powered aircraft carrier.

"Enterprise set the stage for a long and distinguished career that transformed the U.S. Navy and put Newport News Shipbuilding on the map as the birthplace for America's nuclear aircraft carriers," said NNS President Matt Mulherin. "With Enterprise at Pier 2, we have our oldest nuclear carrier at one end of the shipyard, and our newest—Gerald R. Ford (CVN 78)—at the other end, in Dry Dock 12. These carriers represent our remarkable past and our bright future. They represent innovation, strength and diplomacy, and they represent the greatest shipbuilders in the world."

As the only super carrier powered by eight nuclear reactors, Enterprise will be the first aircraft carrier to undergo an inactivation. NNS will defuel the ship's eight reactors and prepare Enterprise for its transit to Puget Sound Naval Shipyard and Intermediate Maintenance Facility (PSNS&IMF). The ship is scheduled to depart NNS in 2016.

Lloyd D. Joyner Sr. was among the shipbuilders who rode Enterprise from Norfolk to Newport News and one of only four shipbuilders on board who helped to build her. He started making molds for the ship in 1958."From the beginning, everybody knew this ship was something special," Joyner said. "It's a privilege and an honor to be here today on her very last voyage."

Enterprise joined the Navy's fleet in 1961. The ship aided in the Cuban Missile Crisis and operations Enduring Freedom and New Dawn, as well as naval maritime security operations.

Capt. William C. Hamilton Jr., Enterprise's commanding officer, addressed the shipbuilders aboard the "Big E," referring to the ship as the poster child for the shipyard's "Always Good Ships" motto. "What a fine ship it was, and what a great job you folks did building her and maintaining her. She is one of a kind. ... It is my privilege to deliver her back to you today. With dignity and respect, we will put this old war
horse to bed." 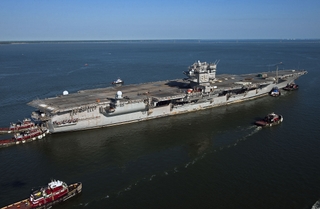 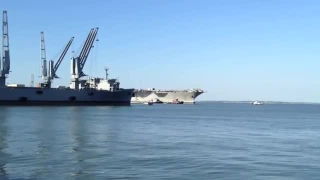