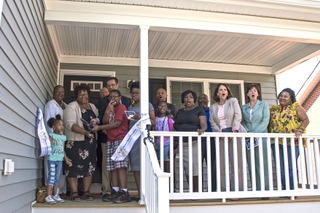 Leaders from Newport News Shipbuilding, local government and the community joined the Johnson family to dedicate the 15th house shipyard volunteers have constructed in partnership with Habitat for Humanity Peninsula and Greater Williamsburg since 2002. Photo by John Whalen/HII

“It is so inspiring to have a company like Newport News Shipbuilding not only provide the funds for their 15th Habitat home, but also have their incredible employees actually come out every year to help build the home,” Green said. “We are so grateful for their support and the positive ripple effects they have made in our communities.”

Brian Fields, Newport News’ vice president of integrated planning and production control, spoke on behalf of the shipyard and presented the house keys and a plaque to the Johnson family. The home is about 1,200 square feet with three bedrooms and two bathrooms.

“At Newport News Shipbuilding, we pride ourselves on the quality of ships we build, and what you can see here is a quality house,” Fields said. Turning to Johnson, he added, “Building a house is one thing; turning it into a home is something else. Now that’s your job. … Congratulations.”

Johnson works for the City of Newport News Human Services Department and said she is committed to taking care of her new home after working alongside volunteers for months to build it. “We are truly blessed,” she said while thanking the homebuilders. “There was love behind it. We built this together.”

Newport News volunteer Jeremy Scicchitano has participated in about 10 Habitat for Humanity projects. He said he is proud to help families experience that “same feeling of connectedness” in the community that he felt when he bought his first home.