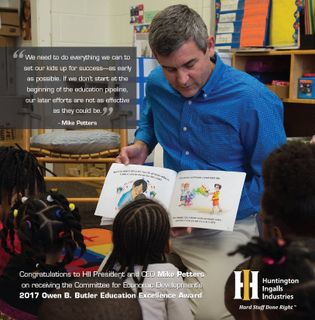 The Owen B. Butler Education Excellence Award was established in 2013 in honor of Brad Butler, former chairman and CEO of Procter & Gamble and former chairman of the Committee for Economic Development (CED). The award recognizes an individual’s exceptional commitment to quality education, skills development and workforce development programs.

“Receiving an award named for Owen B. Butler, a name synonymous with commitment to early childhood education, is quite humbling,” Petters said. “I’m a strong believer that our national security is dependent on a well-educated populace. And the earlier we can formalize that education, the stronger our nation will be.”

In 2016, Petters established the HII Scholarship Fund to annually provide scholarships for children of its employees who are pursuing post-secondary college or technical/vocation degrees, or who are enrolled in pre-k school readiness programs. Petters declines his annual salary, but for $1, to fund the program. He and his family are also the sponsors of the class of 2014 at An Achievable Dream, a Newport News school dedicated to the belief that all children can learn and succeed regardless of their economic status.

The Distinguished Performance Awards Program recognizes business leaders who have answered the call for leadership in their companies and the communities in which they operate. The CED believes when business becomes significantly involved in helping to solve key economic problems, it can have a long-term positive effect on society. Highlighting the outstanding work of our Distinguished Performance Awardees offers the business community strong examples they can follow.