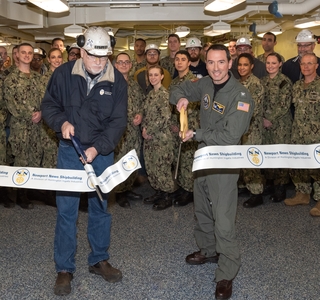 Aircraft carrier John F. Kennedy program director Mike Butler (left) and Capt. Todd Marzano (right), the ship’s commanding officer, cut a ribbon inside of a classroom on the ship to mark the completion and turnover of the first of 2,700 compartments to the ship’s crew. Photo by Matt Hildreth/HII

NEWPORT NEWS, Va., Feb. 27, 2020 (GLOBE NEWSWIRE) -- Huntington Ingalls Industries (NYSE: HII) has reached an important milestone in the construction of the aircraft carrier John F. Kennedy (CVN 79) as the first of 2,700 compartments was turned over to the ship’s crew. The completed spaces allow sailors to begin training on the ship while final outfitting and testing progresses at the company’s Newport News Shipbuilding division.

Earlier this month, sailors assigned to the pre-commissioning unit began coming onboard the ship and working in some of the compartments, which include a training facility, offices and habitability spaces.

“The first sailors coming onboard is a significant step in the life of the ship,” said Mike Butler, program director for Kennedy. “Our completing and turning over these spaces to the crew will allow them to start on-hands, shipboard training, and learn the systems and components they will operate when the ship joins the fleet.”

Christened and launched in December 2019, Kennedy continues to come to life.

Over the next two and a half years, other spaces, such as berthing and mess areas, will be completed, and distributive, mechanical and combat systems, such as catapults and radar arrays, will be tested. 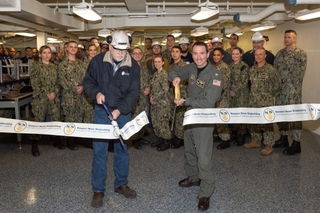