A photo and video footage accompanying this release are available at http://media.primezone.com/noc/

"We worked collaboratively with the Navy to meet our program commitments, and complete this significant milestone," said Irwin F. Edenzon, sector vice president and general manager of Northrop Grumman Shipbuilding-Gulf Coast. "Our shipbuilders did an outstanding job overcoming some challenges in building the nation's most sophisticated LHD to-date. We are confident the Gulf Coast team will continue the steady progress made on LHD 8, and we're on our way to a second quarter 2009 delivery."

"The Navy and industry team overcame many challenges in getting to this trial," said U.S. Navy Capt. Jeffery Riedel, program manager of Amphibious Warfare Programs for PEO Ships. "The ship performed very well. This was the first time an LHD obtained full power on both Gas Turbines and on its electric drive. I look forward to acceptance trials and delivering Makin Island to the fleet."

Makin Island is scheduled for commissioning at her San Diego homeport in October 2009. 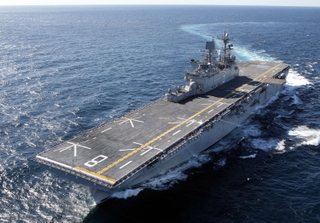