A video accompanying this release is available at: http://www.nn.northropgrumman.com/media/video/m061006_384k.wmv

Rep. Randy Forbes (R-Va.) was the keynote speaker for the event and spoke about the importance of maintaining a technology lead over other countries and other navies. "We've got to be faster, smarter and have greater capabilities than ever before," he said. "This one-of-a-kind, high-tech facility takes us a giant step closer to that goal."

Two sailors from the USS Carl Vinson, a carrier currently in the company's Newport News shipyard undergoing a refueling and complex overhaul, signaled the start of the ceremonial dedication by ringing a ship's bell followed by a traditional playing of a bosun's pipe.

Rebekah Dailey, Aviation Maintenance Administration airman, rang the original ship's bell from Ranger, the first ship designed and built as a carrier from the keel up and launched by Newport News Shipbuilding in 1933. John F. Singleton, chief warrant officer, then sounded the bosun's pipe as ceremony participants unveiled a specially designed mural depicting the history of carrier aviation dedicated to the men and women who serve America.

"We applaud your facility, and we look forward to using it," said Fitzgerald. "I think the fleet will be the better for it."

ASIC is located in the Herbert H. Bateman Virginia Advanced Shipbuilding and Carrier Integration Center and is comprised of two laboratories called SimLab and FlexLab.

SimLab is a 9,000 square-foot laboratory that houses a modeling and simulation facility, an integration facility for validation of new concepts and designs, and a collaboration center for government and industry partners.

FlexLab is a 2,400 square-foot laboratory that houses a full-scale mock-up of a portion of the warfare command and decision center for the next-generation aircraft carrier class, CVN 21. Newport News engineers, designers and technologists will use FlexLab to investigate, prototype, test and validate current and emerging technologies which provide the capability to rapidly reconfigure the decision centers. 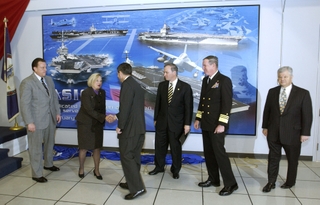