“This successful sea trial is another testament to the quality work our shipbuilders continue to provide in the LPD program,” said Ingalls Shipbuilding President Brian Cuccias. “These are complex vessels, and I’m proud of our workforce, who have the skills and knowledge it takes to design, build and test these American warships.”

Major testing conducted during builder’s trials include anchor-handling, ballast/de-ballast of the ship’s well deck, detect-to-engage, full power ahead and astern and steering demonstrations.

“We place great importance on our relationships with our customers and the responsibility we have to the sailors and Marines who will own this ship,” said Kari Wilkinson, Ingalls’ vice president of program management. “The LPD team is strong and very prepared to continue providing these capable assets to our country.”

Ingalls’ shipbuilders are now preparing Portland for acceptance trials in August, when the U.S. Navy’s Board of Inspection and Survey (INSURV) will conduct inspections and witness final demonstrations before the ship is delivered to the Navy.

“Our shipbuilders continue to work in concert with one another, and this ship is another example of their successes,” said George Jones, Ingalls’ vice president of operations. “We have the best construction team in our industry today, and this team, along with the nationwide supplier base, will continue to see more successes with their winning behaviors and team spirit.”

Portland (LPD 27) is named for the largest city in the state of Oregon. The state has a long history with the Navy, going back to the construction of hundreds of World War II Liberty and Victory ships at three Portland-area shipyards. 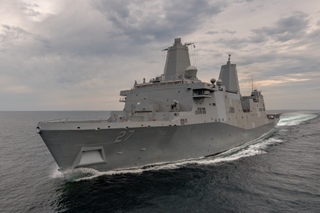 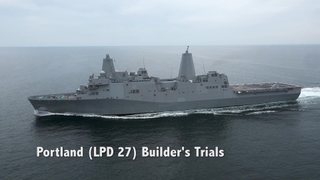