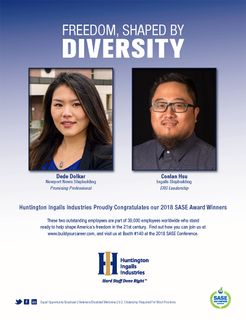 Dede Dolkar, a material process engineer at Newport News Shipbuilding, received the Promising Professional award. The award recognizes an early career professional who demonstrates tremendous potential for future contributions to the fields of science and engineering.

Conlan Hsu, a structural engineer at Ingalls Shipbuilding, received the ERG Leadership award. The award recognizes a person who has served or is serving in a leadership capacity in their company’s Asian Pacific Islander employee resource group (ERG) and the overall impact of their involvement in advancing the mission of the ERG and influencing the company’s support for their API employees.