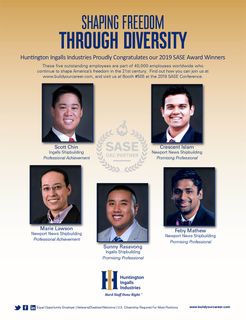 Marie Lawson, an engineer at Newport News, and Scott Chin, an engineer at Ingalls, received Professional Achievement awards. The award recognizes highly experienced, mid-career professionals who have made significant discoveries or important advances in their chosen career paths and are acknowledged as leaders of large initiatives.