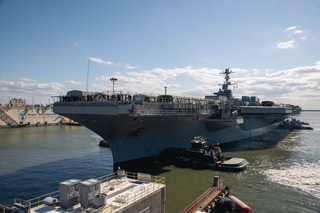 USS John C. Stennis (CVN 74) arrives at Huntington Ingalls Industries' Newport News Shipbuilding division on May 6, 2021 to begin its mid-life refueling overhaul and maintenance availability. The ship will be the seventh Nimitz-class aircraft carrier to undergo its refueling and complex overhaul (RCOH). Photo by Ashley Cowan/HII

“We look forward to continuing our work with the ship’s crew and our 579 vendors across 36 states that provide material and services which brings stability of this industrial base and is critical to our ability to continue to build and maintain the Navy fleet our Navy and nation needs,” West added.

Stennis is the seventh Nimitz-class carrier to undergo this major mid-life availability, representing 35% of all maintenance and modernization completed during its 50-year service life. Over the next four years, Newport News will perform hull and freeboard blast and paint, repairs to its propellers, sea chests, shafts, and rudders and defueling and refueling of its power plant.

This effort, which will continue through late 2025, will produce a recapitalized carrier capable of supporting current and future warfare doctrine while continuing to operate as the centerpiece of the Navy fleet and national defense for another 25 years.