PASCAGOULA, Miss. (July 12, 2016)—Huntington Ingalls Industries’ (NYSE:HII) Ingalls Shipbuilding division has successfully installed the deckhouse on the amphibious assault ship Tripoli (LHA 7). The lifting of the deckhouse is a major event in the ship’s construction schedule and begins the integration of the three largest sections of the ship. The deckhouse was installed on Saturday—three weeks ahead of schedule.

“Ingalls Shipbuilding continues to be the builder of choice when it comes to the construction of amphibious warships for the U.S. Navy,” said Ingalls Shipbuilding President Brian Cuccias. “We are benefitting from serial production, including our process of rolling over the same shipbuilding crews to work on the large-deck amphibious ships. It’s a busy time on LHA 7, and our construction milestones continue to clock in ahead of schedule. We look forward to delivering another quality amphibious ship to our customer in 2018.”

Like USS America (LHA 6) which was delivered in 2014, Tripoli will have an increased aviation capacity to include an enlarged hangar deck, realignment and expansion of the aviation maintenance facilities, a significant increase in available stowage for parts and support equipment, and increased aviation fuel capacity. Similar to its predecessors, the ship will be able to operate as the flagship for an Expeditionary Strike Group. Ingalls has built five Tarawa-class (LHA 1) ships as well as eight Wasp-class (LHD 1) ships. Ingalls was recently awarded a contract for LHA 8.

This deckhouse installation on Tripoli was no small feat, according to Premo Sabbatini, LHA 7 program director. “The deckhouse is comprised of five deck levels and includes radio and radar spaces, the primary flight control station, and the pilot house,” he said. “The estimated lift weight for the deckhouse is 701 short tons and required three cranes to complete this task. Performing this milestone ahead of schedule is a testament to the hard work and dedication of our shipbuilders.”

Tripoli will be the third ship to bear the name that commemorates the capture of Derna in 1805 by a small force of U.S. Marines and approximately 370 soldiers from 11 other nations. The battle, memorialized in the Marines’ Hymn with the line “to the shores of Tripoli,” brought about a successful conclusion to the combined operations of the First Barbary War. 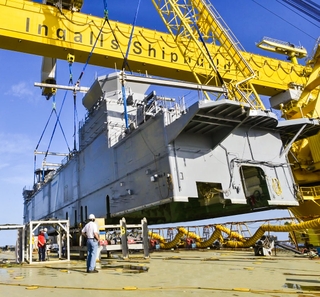 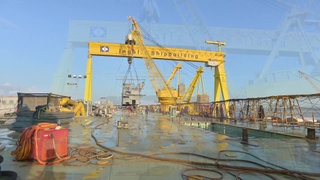