“We continue to focus on reducing cost, and we are pleased with our progress,” said Mike Shawcross, Newport News’ vice president, CVN 79 carrier construction. “The incorporation of lessons learned from CVN 78 on to CVN 79—and major build strategy changes to construct the ship a different way—are having a significant impact on our construction efficiencies, just as we anticipated they would.”

Like Ford, Kennedy is being built using modular construction, a process where smaller sections of the ship are welded together to form larger structural units (called “superlifts”). Equipment is then installed, and the large superlifts are lifted into the dry dock using the company’s 1,050-metric ton gantry crane.

Kennedy is on track to be completed with 445 lifts, which is 51 fewer than Ford and 149 less than USS George H.W. Bush (CVN 77), the last Nimitz-class carrier. “Fewer lifts to the dock means we’re building larger superlifts with more outfitting installed prior to erecting the sections in dock,” said Mike Butler, Newport News’ Kennedy construction program director. “This translates to man-hour savings because the work is being accomplished off the ship in a more efficient work environment.”

Close to 90 lifts have been placed in the dock and joined together since the ship’s keel was laid in August 2015. Kennedy is scheduled to be launched in 2020 and deliver to the Navy in 2022, when it will replace USS Nimitz (CVN 68). 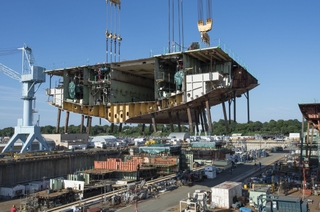 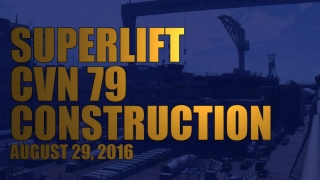