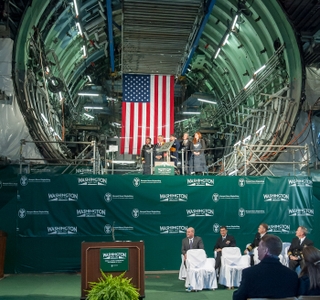 The keel-laying ceremony for the submarine Washington (SSN 787) took place Saturday in front of one of the ship’s units.

The submarine’s sponsor is Elisabeth Mabus, daughter of Secretary of the Navy Ray Mabus. Acting as the keel authenticator, during the ceremony she chalked her initials onto a metal plate. Her initials were then welded onto the plate, which will be permanently affixed to the submarine as a symbol of her relationship with the ship, its shipbuilders and crew.

“The vessel whose keel we lay today will be the most advanced ship in the world, its technology unmatched,” Secretary Mabus said. In his principal address, he celebrated the shipbuilders and supplier base dedicated to constructing the future USS Washington. “Their dedication, their expertise, their incredibly hard work will fashion from steel and wire and electronics the premier platform that will be the Washington,” he said. “We build the best warships in the world.”

Geiger said the Virginia-class program is fortunate to be in a period of increased submarine production. “With today’s event, over the past five and a half months we have celebrated two keel layings, a christening and a commissioning across four Virginia-class ships,” he said. “It is with great satisfaction that we look out over a horizon of continued robust activity generated by the completion of the remaining block three submarines, and the recent award of 10 additional ships in the Block IV contract.”

Washington will be the 14th Virginia-class submarine and the seventh to be delivered by Newport News. Construction began in September 2011, marking the beginning of the two-submarines-per-year build plan between Newport News and Electric Boat. The submarine is roughly 70 percent complete and is on track to complete next summer.

“Each submarine we build is a reflection of the hard work and innovation of our more than 23,000 shipbuilders, and it is most appropriate that this submarine is named for Washington, a state that thrives on innovation,” Mulherin said. “When SSN 787 is complete, she will be the most innovative and most technologically advanced submarine in the world, and today is the first step in her journey to get there.”

The submarine is named for the residents of the state of Washington and their continued support of the U.S. military. Washington is home to 35 Medal of Honor recipients that span from the Civil War to the War on Terror.

Huntington Ingalls Industries designs, builds and manages the life-cycle of the most complex nuclear- and conventionally powered ships for the U.S. Navy and Coast Guard. For more than a century, HII’s Newport News and Ingalls shipbuilding divisions in Virginia and Mississippi have built more ships in more ship classes than any other U.S. naval shipbuilder. HII also provides engineering and project management services expertise to the commercial energy industry, the Department of Energy and other government customers. Headquartered in Newport News, Va., HII employs approximately 39,000 people operating both domestically and internationally. For more information, visit: 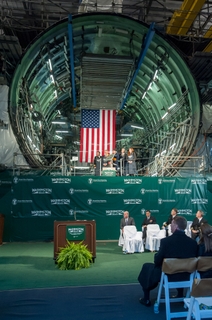 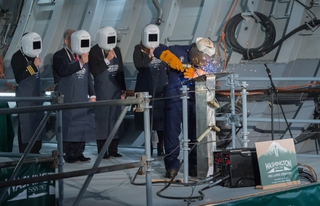