Thank you, Matt [Needy], for that very kind introduction. I am so honored to be here today – with all of you – graduates, family, friends and loved ones. I have attended this ceremony many times before, but this class, the Class of 2017, is the first class for me in my new role as president.  So I hope you will indulge me when I say that I kind of like to think of you as “my” class, because each of us all embarked on a new journey last year – graduating from the familiar – into something new and even a little daunting. And if you’re like me, there are probably still days when you think to yourself…. “Am I doing this right?!?” 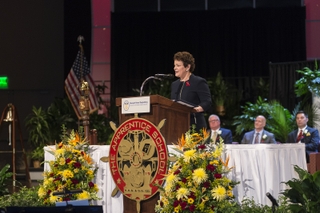 What I’ve learned over the past seven months is that it’s okay to feel like you’re out of your comfort zone. In fact, it’s required if you are going to grow. Like for me right now, delivering today’s commencement address. I’ve been tasked with the awesome responsibility of being inspirational, memorable and maybe a little funny – all while keeping it short. Definitely not in my comfort zone. So to help prepare for today, I have turned to the classics: Art, history and hip hop.

Over shutdown, I saw the Broadway musical Hamilton, about the life and times of American Founding Father Alexander Hamilton and the birth of our nation. Unlike traditional Broadway musicals, this one features both singing and rapping. And no, I am not going to do either today.

The past few months have been a bit of a whirlwind for me, and seeing this show helped me to take a break, and to let myself be inspired by something that on the surface has little to do with shipbuilding. Today, I’d like to share with you three themes from the show that made a huge impact on me personally, and that also resonate with me professionally as I think about my vision for Newport News Shipbuilding and your role in it.

The first theme centers on leveraging diversity for greatness. The musical Hamilton tells the story of the Revolutionary War and the birth of our nation. Hamilton creator Lin-Manuel Miranda perfectly illustrates just how diverse and different the Founding Fathers were. I love how this was depicted with heated cabinet meeting rap battles by the likes of George Washington, Thomas Jefferson and James Madison. Yet despite their differences – or rather because of them – they were able to establish a new nation and invent a whole new form of government. They ultimately set aside their own individual interests, and focused on the national interest for the greater good of our country. If they had not succeeded, we would not be sitting here today.

As I look out at my class sitting here today, it is your diversity that brings relevance and certainty to our future. The diverse experiences and the perspectives that you will bring to our shops, our dry docks, our piers – and our boardrooms – will ensure our future success. Take for example your fellow graduate, Helen Gault.

Helen spent 10 years as a professional ballerina before trading her toe shoes for steel toes. Her flexibility allows her to easily crawl into tight spaces to inspect welds. Helen said that each day in the shipyard provides her the opportunity to achieve something meaningful. As the daughter of an Air Force pilot, she brings a powerful perspective to her work. Helen lost her father at a young age to his work. And she understands that the work she now does helps to protect the military women and men who serve on our ships, so that they are able to safely return home to their families. Helen’s diverse background and unique perspective makes us a better company.

The second Hamilton-inspired theme is that it’s important to focus on today while also having a long-range vision for the future. The idea for Hamilton started when creator Lin-Manuel Miranda casually started reading an Alexander Hamilton biography while on vacation in Mexico. The more he read, the more his wheels started to turn, and soon, he says, hip-hop songs started ‘‘rising off the page.’’ His first vision was pretty innovative – a hip-hop concept album about the life and times of our nation’s first Treasury Secretary. What’s so inspiring to me is how his initial vision grew every time another person with a unique theater talent heard the idea. Each wanted to be part of it, and brought something new to it, and it became so much more than they ever imagined. It took Miranda seven years to write the show – it took hard work, long hours and a belief that he was creating something larger than himself.  And he did.

I believe all great evolutions and revolutions – whether its history or music or business require an intense focus on today’s immediate needs while keeping the long-range vision sharp. Someone once said that “a vision is great on paper, but the execution needs to be as brilliant as the plan.” That someone is apprentice graduate and outside machinist Vlad Casanave. He said the visionary can be excited, but getting others to reach that same level of excitement is a challenge. Vlad—you could not be more right.  If we aren’t excited about our future, aren’t engaged in what our future looks like, our vision is not likely to become a reality.

And this leads me to my third and final takeaway from Hamilton: Be brave! In one of the show’s most popular songs, the lyric – “I am not throwing away my shot” – has become an anthem for having courage. Transforming Alexander Hamilton and the Founding Fathers into a hip-hop musical was, in and of itself risky, innovative and different from anything that’s ever been done before. And on top of that, the creative team cast African American and Hispanic actors to play the Founding Fathers. That took guts. When the musical debuted in 2015, it disrupted the theater world, and has turned into one of the most celebrated musicals of all time, earning 11 Tony Awards and a Pulitzer.

It is that kind of determination and that willingness to consider new paths that I see in all of you. Take Hailey Kahlbaum’s decision to attend The Apprentice School, for example. Hailey, who sits among you today, chose The Apprentice School over William & Mary, Christopher Newport University, Virginia Tech and the University of Virginia. People who Hailey admired were dumbfounded. One of Hailey’s teachers told her she was making a big mistake and cut ties with her. Hailey’s big sister worried that she would miss out on the traditional college experience. But Hailey persisted, knowing that the Apprentice School offered numerous opportunities, a guaranteed job and continuous education. She didn’t know what her major would be, but Hailey knew she enjoyed working with her hands. So she made a brave decision, that as it also turns out, ended up being a very wise one.

Today, she is a make-up foreman in Quality Control and she just recently accepted a foreman position in the Aircraft Carrier Overhaul Program. Last year, Hailey bought her first house and got engaged to a fellow shipbuilder. But my favorite part of Hailey’s story is that her father has followed in her footsteps. After seeing Hailey’s accomplishments and how much she enjoys her work, her dad, Steve, applied to the shipyard and was hired as an Outside Machinist. And from what I understand, Dad is doing great. Just like the Class of 2017.

Hailey, Vlad, Helen and all 148 of you – “my class” – my Hull number 1… Each of you will play a crucial role in protecting our military and furthering the freedoms for which Alexander Hamilton and the other Founding Fathers struggled. As graduates of The Apprentice School, I consider you leaders of Newport News Shipbuilding. You are coming into this role during a unique time in our company’s history. It’s such an exciting time to be a shipbuilder. We are transforming how we build ships, how we run our business, and how we improve the work experience for all of our people. We are working smart every day to innovate, to rethink and reinvent the business of shipbuilding.

Today, we are moving forward – committed to building a future focused on people and technology, not just for today’s workforce – but for our children, and our children’s children. There is so much opportunity for greatness. How will you achieve yours? What is the story that future generations of shipbuilders will tell about you? What legacy will you leave? Because if you remember nothing else from this speech, remember this: History has its eyes on you.

Thank you very much, and Congratulations!