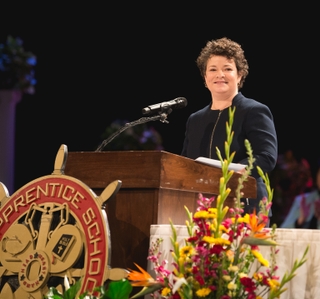 Ours is not just a job – it’s a calling to be part of something much greater than ourselves. But what does that really mean? And what does that look like or feel like? We prepared a special video to help answer that question. So, let’s roll the video.

The video does a wonderful job of capturing how – for 100 years – apprentices have contributed to our nation and to the world.

How will you leave your legacy? Like so many others, following the January helicopter crash that claimed the lives of Kobe Bryant, his daughter Gianna and seven others, I found myself wanting to learn more about a man I knew only as a basketball great but whose impact on more than just his sport, I could physically feel through the public outpouring that continues today.

Kobe Bryant has been quoted many times about his work ethic and leadership, and I believe his words perfectly illustrate what it means to be part of something beyond yourself. He said, “You are responsible for how people remember you – or don’t. So don’t take it lightly. If you do it right, your game will live on in others. You’ll be imitated and emulated by those you played with… those you played against… and those who never saw you play at all. So leave everything on the court. Leave the game better than you found it. And when it comes time for you to leave, leave a legend.”

Like basketball, shipbuilding is not an individual sport – it’s a collective effort. But how you show up each day on your “court” – whether it be a ship, a shop or an office building—you have the opportunity to bring your all – your everything – and over your career, to leave Newport News Shipbuilding better than you found it. That is what The Apprentice School’s first graduating class did 100 years ago, and I know you will do the same. Congratulations on your extraordinary achievement. You have my deepest appreciation, respect and admiration for continuing our legacy of always good ships, and for moving our company forward.