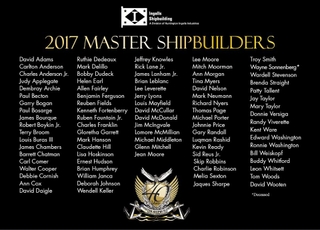 Thanks, Edmond, and good evening everyone.

It is genuinely an honor to be able to join your family and friends on this special night as we celebrate and congratulate you Master Shipbuilders. A lot has happened since 1977 when you joined the Ingalls family. You are truly in a special class.

Your unique experience has been molded with great accomplishments, some challenges, and many right decisions made during your careers.  You are the heart of Ingalls Shipbuilding.  But before we celebrate these accomplishments, I’d first like to recognize the families of our Master Shipbuilders, who have supported you throughout your long and successful careers. I’d like to ask all the family members of our Master Shipbuilders please stand so we can say thank you.

I hope that everyone saw the ad Wednesday in the Mississippi Press and Mobile Press-Register and today in The Sun Herald. In the ad we recognize each and every one of you as Master Shipbuilders because we are proud of your accomplishments.

Brian Cuccias speaks at the Master Shipbuilder Dinner on May 11, 2017, recognizing employees who have achieved 40 years of continuous service. Photo by Lance Davis/HII

Would all of the NEW … 40-year … Master Shipbuilders who are here with us tonight, please stand?

We have signs in the shipyard that say “What You Do Today Matters.”  I believe that doing what matters starts with making a right decision in every situation.

Ingalls has been building great ships for more than 79 years. That means all of you, our new and returning Master Shipbuilders, have been with Ingalls for more than half of the company’s life.

Robert I. Ingalls Sr. said “It is our purpose to build, now and always, the finest ships the world has ever known.” That is as true today as it was back then. What you did when you started matters and what you do today matters.

We are proving – once again – that America’s Shipyard builds the finest war ships in the world for the greatest Navy, Coast Guard and Marine Corps in the world.
I thank you for that!

In the past 40 years, between Avondale and Ingalls, we have built or overhauled and delivered 242 ships.  Think about that for a second. 242 ships! Do you know that almost 70 percent  of the Navy’s active surface warships have been built by Ingalls and the people in this room?

I’d like to give you a few facts about your career at the shipyard. Of course quick facts over a 40 year career aren’t that quick. These are both remarkable --- and unprecedented at any other shipyard in the country. (View the slideshow)

When you started in 1977, Ingalls shipyard was a very active place…with nearly 26,000 shipbuilders working each day.

Slide 3 Today you are witnessing the ongoing construction of Tripoli (LHA 7) which will be christened in September and Slide 4, recently the contract award of the newest ship in the class Bougainville (LHA 8).

Slide 5 Multi-purpose amphibious assault ships or amphibs were hot during the ‘80s with the delivery of the first landing helo dock Wasp (LHD 1) and delivery of the dock landing ship Tortuga (LSD 46).

With Makin Island (LHD 8), delivered in 2009, Ingalls remains an integral part of the Marine Corp’s force in the Global War on Terror. Slide 8 From 1976 to 1983 you constructed 31 destroyers with names like Kincaid, Hewitt, Elliot, Conolly, Cushing and O’Bannon.

The ‘70s also saw Ingalls receive the contract to build the Ticonderoga-class guided missile cruisers, which then led to the Arleigh Burke-class guided missile destroyers. Slide 9 And we are seeing the benefits of these powerful ships. Just last month, Ingalls ships Ross (DDG 78) and Porter (DDG 71) fired a series of strikes on a Syrian airfield as a response to the release of chemical weapons.

Our ships, your ships, are critical to safety and security world-wide.

Slide 10 Ingalls entered the Age of Aegis in the 80’s. The new Aegis system was first integrated into Ingalls’ Spruance-class destroyers starting with the (CG 47) Ticonderoga which was christened by First Lady Nancy Reagan and delivered in 1982.

Slide 13 In 2000, the USS Cole was brought back to Pascagoula with a gaping hole in her port side --- the result of a terrorist attack in Yemen. Slide 14 The shipyard took it personally – YOU took it personally – and brought Cole back to fighting condition in record time.

Slide 15 And then a year later, in 2001, an attack against the United States would make September 11th a date we would NEVER FORGET. Slide 16 Three Ingalls-built ships were named as tribute to the heroes and victims of 9/11: New York (LPD 21); Arlington (LPD 24) and Somerset (LPD 25).

Slide 18 In addition to the ships built here we also overhauled or modernized 21 ships in the 1980s including nuclear attack subs, test ships, a hydrofoil, patrol ships, destroyers and the Battleships Iowa and Wisconsin.

Slide 19 In 2016 we were awarded the contract to perform overhaul work on USS Ramage (DDG 61) which will be complete this August.

What a legacy you have at Ingalls!

And the legacy continues as we continue to build NSCs, DDGs, LHAs and LPDs with Safety, Quality, Cost and Schedule; and as we look forward to compete and build the future fleet of LXR’s, DDG’s, and LHA’s.

Slide 20 Ladies and Gentleman --- Master Shipbuilders --- our ships may make history. But their history starts here with each of you.

You have all played a major role building these ships that are not only important for our Shipyard and Community, but for our Country.  You have made a difference in helping less experienced shipbuilders become great shipbuilders. You  have helped your friends, community, and family.

The leadership and experience you bring to work every day has made a difference. What you do today --- and have done every day for at least 40 years --- MATTERS.
New Master Shipbuilders   ……..  YOU ARE “INGALLS.”

Thank you for helping Ingalls become America’s Shipyard once again and ready for the challenges of the next decade.

So, you’ve seen a lot in the past 40 years. Want to remember some more of it? I’d like to share with you a short video that was created especially for you by our Communications department. You may see a few faces you recognize. So please, get comfortable and let’s roll the video!

You have made great contributions to this shipyard, to this company, and to our Nation.  You have helped shape history, and your legacy will live on forever.