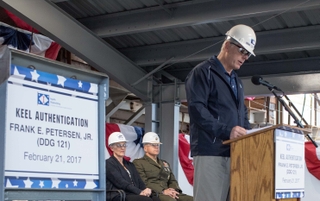 It is always exciting to celebrate the keel authentication of another Arleigh-Burke class destroyer at our shipyard.

We are honored to have with us today the sponsor of this great ship, Mrs. D’Arcy Neller, and her husband, General Robert Neller, Commandant of the United States Marine Corps.

The keel authentication is an important milestone in a ship’s life – as we lay the foundation upon which this great ship will be built.

Like her namesake, DDG 121 will be strong and capable. Our men and women in the Navy --- and General Petersen’s legacy --- deserve nothing less.

Thank you all for being here today to mark this important construction milestone in the life of Frank E. Petersen, the ship.

May God bless this ship, her namesake, those who are building her and those who will call her home. And God bless the United States of America.