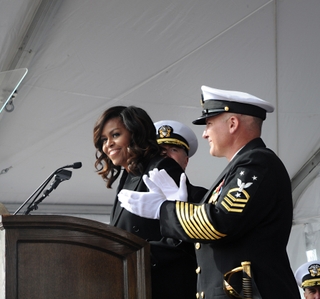 First Lady Michelle Obama announces “Bring the Ship to Life” spurring its crew members to race across the brow and fall in formation aboard USS Illinois (SSN 786) during the commissioning ceremony on Naval Submarine Base New London (U.S. Navy photo by Chief Petty Officer Darryl I. Wood/Released)

I am privileged to be here representing the 20,000 women and men of Newport News Shipbuilding. Shipbuilders who come to work each day to do their best, and to be their best.
Whether working on a submarine, in a shop or at a desk – being a shipbuilder isn’t just what we do – it’s who we are.

One of our shipbuilders is Sharonda Steverson, who buys the material and equipment for Virginia-class submarines. She sums it best when describing what it’s like to work at the
shipyard. She says: “It’s the place where you’re made.”

This submarine – USS Illinois – represents a commitment to quality by a team dedicated to continuous improvement, boat after boat… Delivering each submarine ahead of schedule and under budget.

Like her sister ships, USS Illinois is a technological marvel. She represents the very best of American manufacturing, innovation, and pride. She represents the very best of the U.S. Navy in Commander Porter and his fine crew. But this submarine has something – or someone – that her sister ships do not have. And that is… the First Lady of the United States.

During the christening ceremony, Mrs. Obama imparted her strength, her sense of service, and her inspiring spirit into this submarine. And because of this, USS Illinois will always stand for freedom everywhere she sails, representing our nation’s 21st state, and the United States, for many years to come. 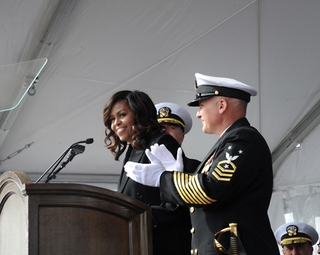