It is with great pride that I welcome you to Newport News Shipbuilding, and to the christening of CVN 79, John F. Kennedy. 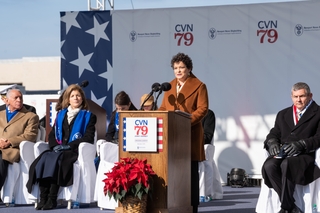 We are so pleased you could join us and take part in this special day. I would like to extend a special thanks to Father Thomas Ianucci for delivering the invocation…The U.S. Naval Sea Cadet Corps Color Guard…And the United States Fleet Forces Band…For their roles in opening our ceremony with such patriotic spirit. I’d also like to thank Musician Third Class Amanda Huddleston, for her beautiful performance of the National Anthem. Thank you all.

It’s an honor to welcome such an impressive crowd to our shipyard today as we celebrate the Navy’s newest nuclear-powered aircraft carrier…And the American hero for whom this ship is named.

I would especially like to recognize Ambassador Caroline Kennedy, her husband, Ed Schlossberg, and their daughters, Rose and Tatiana. To all the Kennedy family and friends…Including representatives from The John F. Kennedy Presidential Library and Foundation…

For more than a century, we have christened ships here at Newport News Shipbuilding. It is a Navy tradition in which we are honored to participate. But we are not gathered today to simply christen a ship...We are here to celebrate America’s military might…and the brawn behind it.

We are here to celebrate innovation, pride and perseverance that is the American way…And we are here to honor the patriot who inspired it.

Today also marks an important day in our country’s history – the 78th anniversary of the attacks on Pearl Harbor. Celebrating this ship milestone on Pearl Harbor Day makes it even more poignant and relevant as we reflect on our higher purpose in the defense of our nation’s freedom and in the preservation of world peace.

I speak for every Newport News shipbuilder — 25,000 strong — and the thousands of suppliers across the nation who support us…When I say that we are proud to build the John F. Kennedy, CVN 79.

Since the first cut of steel nine years ago, thousands of shipbuilders have brought incredible integrity, skill and innovation to bear, working around the clock…In pouring rain, unrelenting humidity and bitter cold to create this magnificent marvel beside us.

They continue to overcome physical and technological challenges that we refer to as “the romance of shipbuilding,” and they rise to every challenge. Yet when you ask them to describe what they do, you will find that they are a humble group.

I recently met Mr. Roddrick Smith, one of the welders who is helping to build Kennedy. He told me that he believes shipbuilders should feel the same pride as a firefighter, police officer or teacher because of our contributions to the greater good. But he went on to say that because our ships take years to build, and because of the harsh environment in which we often find ourselves, there are times when it is difficult to see the big picture.

We invited every Newport News shipbuilder to this ceremony today and encouraged them to bring their families…Because I believe few things demonstrate the “big picture” better than this beautifully majestic ship rising from the floor of Dry Dock 12.

But if seeing this ship doesn’t leave you awestruck, let me add one more thing. Our shipbuilders – the women and men of Newport News Shipbuilding – are the only people on the planet who can build it.They are unsung heroes...So at this time, I ask all of our shipbuilders and supplier representatives to please stand as we honor your contributions to the greater good.

President Kennedy once said: “Change is the law of life. And those who look only to the past or the present are certain to miss the future."

As we honor the history of CV 67 and celebrate the current marvel that is CVN 79, we also look to the future. CVN 79 will be the last aircraft carrier built using traditional paper drawings. The next carrier, Enterprise, CVN 80, will be built digitally on tablets, incorporating lessons learned from this ship.

When President Kennedy asked Americans to be pioneers in a New Frontier…It was not a place, but rather a way of thinking and acting to move our nation forward into a future of new discoveries in science and technology.

I am proud that his namesake ship is serving as our proving ground for the new frontier of digital shipbuilding...

And I am even more proud that every day, our shipbuilders answer President Kennedy’s challenge to ask ourselves what we can do for our country…With every foot of cable…Every visual work instruction…Every inspection report…Every design…Every crane lift…Every stroke of paint…And every piece of steel…

And we are proud, that for 133 years, our founding principle and promise still rings true. Shipbuilders past and present, join me when I say…

We shall build good ships here
At a profit if we can
At a loss if we must
But always good ships.

This is our solemn pledge to our Navy and to our nation. And we are excited to welcome John F. Kennedy, CVN 79, into our family of “Good Ships.”