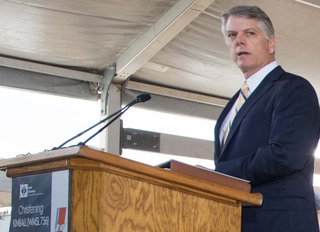 We have a special group of veterans here with us today that I would also like to recognize. The Armed Forces Retirement Home in Gulfport is home to 500 men and women representing all service branches.

These residents have served in World War II, the Korean War and Vietnam and include recipients of the Bronze Star, Silver Star, the Lone Sailor Award, and the Congressional Medal of Honor. And the average age of the residents is 82 years young. Ladies and Gentlemen of the Armed Forces Retirement Home, please give us a wave so we can thank you for your service to our country.

So it makes sense that this class of ships is called the Legend Class. And it is certainly fitting that this particular ship is named after a Coast Guard legend himself: Sumner Kimball organized and led the United States Life-Saving Service for 37 years.

Kimball’s unquestionable drive, leadership and perseverance won hearts, minds and funding to build and transform the service into a great humanitarian and lifesaving organization. Later becoming part of the United States Coast Guard. Kimball, the ship, is the seventh ship we have built in this class. And with her, we’ve proven, once again, that American workers, Ingalls Shipbuilders, can take on some of the most challenging manufacturing projects in the world.

Our Ingalls / Coast Guard team continues to get stronger, and more efficient with every ship we produce. Our last ship award, in 2016, was actually less than the same ship 3 ½ years ago- that’s what this great team and a hot production line can deliver.

NSC’s have been the flagship of the Coast Guard fleet since Bertholf (NSC 1) was commissioned in 2008. Since these Ingalls-built Cutters came on the scene, the Coast Guard has greatly increased its capabilities, most notably drug interdiction.  The service set a record in 2016 by confiscating more than 410,000 pounds of cocaine, valued at over 5.6 billion dollars.

In October of 2016, the Ingalls-built Cutter USCGC Waesche intercepted more than 39,000 pounds of that cocaine worth over 531 million dollars. Collectively, the Coast Guard has also apprehended almost 200 suspected smugglers for prosecution in the U.S. and partner nations.

Without question, their National Security Cutters are clearly changing the game in how we protect our country. That makes us proud… and more importantly, it makes our potential enemies nervous. The men and women who will one day sail into harm’s way on USCGC Kimball deserve nothing less.

Our NSC Program is an outstanding team, and they are on a mission. From NSC shipfitter apprentice Todd Young to electrical superintendent Steve Panter, to pipefitter and one of our Master Shipbuilders, Rose Eldridge, all of our NSC shipbuilders are true patriots - driven to produce the best ship possible for our Coast Guard customer and for our great Nation.

These are some of the thousands of Ingalls Shipbuilders who work hard every day to produce the finest ships in the world - true patriots. Many of them are with us today. Would the NSC team and all Ingalls shipbuilders please stand and be recognized?

In closing, I’d like to thank you once again for joining us at this historic event.

May God bless the officers and crew who will serve in this great ship and all those who serve to defend our Nation.
And may God Bless America.  Thank you.

We are honored to have Kay Webber Cochran, wife of The Honorable Thad Cochran, Mississippi’s Senior United States Senator, as our sponsor to christen this great ship. We couldn’t ask for a better ambassador for Kimball.

Ladies and Gentlemen, please give a warm South Mississippi welcome to our ship’s sponsor...Kay Cochran!