By Ron Murray, vice president, quality, at Newport News Shipbuilding (remarks as given)

Today is a special day--not only for Hilton Village, a very special place—but for the greater Newport News community and the more than 22,000 shipbuilders of Newport News Shipbuilding who I am honored to represent. The shipyard and this community go way back, and we are proud to be your neighbors and your friends. 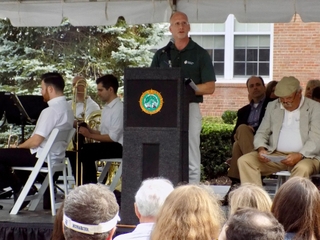 Hilton Village has such a wonderful story to tell, and I would like to thank Mrs. Jackie Legg and the Hilton Village Centennial Committee for all of their hard work, research and planning that has brought us together to remember and celebrate in such a fitting way.

I’m sure that by now, many of you have heard the story of Homer L. Ferguson, one of our most notable shipyard presidents who led the charge, and donated the land, to build this community. I will take just a few minutes to share the Ron Murray Reader’s Digest version.

In the early 1900s when it became clear that World War I would be more than a European war, our military needed ships that only Newport News Shipbuilding could build. That also meant more shipbuilders.

Mr. Ferguson not only had a vision for building ships, he also had a vision for Newport News. He knew that to find the best shipbuilders to build the greatest ships in the world, he needed to offer good paying jobs, a vibrant community and quality housing. But Newport News was experiencing a severe housing shortage. The shipyard began to grow beyond what Newport News could offer, leading to room sharing, tent cities and temporary structures.

It was no way for anyone to live, so Mr. Ferguson set off to do something about it. In January of 1918, he stood before a Senate committee and asked the government to help build these houses. He testified that Newport News could build no more ships until proper housing was made available for shipyard workers. Under the direction of Congress, the U.S. Shipping Board and Emergency Fleet Corporation agreed to underwrite the project. This is how Hilton Village came to be.

The place chosen to bring Ferguson’s vision to reality was a heavily-wooded, 200-acre piece of property known as the Darling Tract. The only development on this land was an old homestead known as Hilton. Here, the shipyard proposed to build not only 500 houses, but a town complete with churches, schools and businesses for skilled shipyard workers.

By the fall of 1918, the first families were moving in, and by spring of 1919, nearly all of the homes were built. But Hilton Village was more than a collection of structures. It was a symbol of American ingenuity and pride.

And that stability helped build the foundation on which our company has grown over the last 132 years.

Today, Hilton Village continues to thrive as a vibrant, warm and enterprising community. And it is still home to many of our shipbuilders. I know first-hand what a great place it is to raise a family because I’m proud to call myself a Hilton resident, as my family lives just a few streets away from Hilton Village.

As I close, I would once again like to thank the Centennial Committee for inviting me to be a part of this event. As our country’s first public planned community, Hilton is a national treasure that has stood the test of time. I have no doubt that the patriotism and sense of purpose that led to its establishment will continue to ensure its success for many centuries to come.

With that, I would like to invite Hilton Village Historian Charles Webb to join me at the podium. On behalf of Newport News Shipbuilding, I would like to present you with the original plat of Hilton Village that was hand-drawn by our plant engineering office 100 years ago. We have had it stored in our vault for all these years and it is high time that it be displayed where it belongs – here in the Hilton Village community.

Congratulations on 100 years of peace and prosperity. We are proud to have been part of Hilton Village’s establishment and we look forward to being a part of its exciting future.